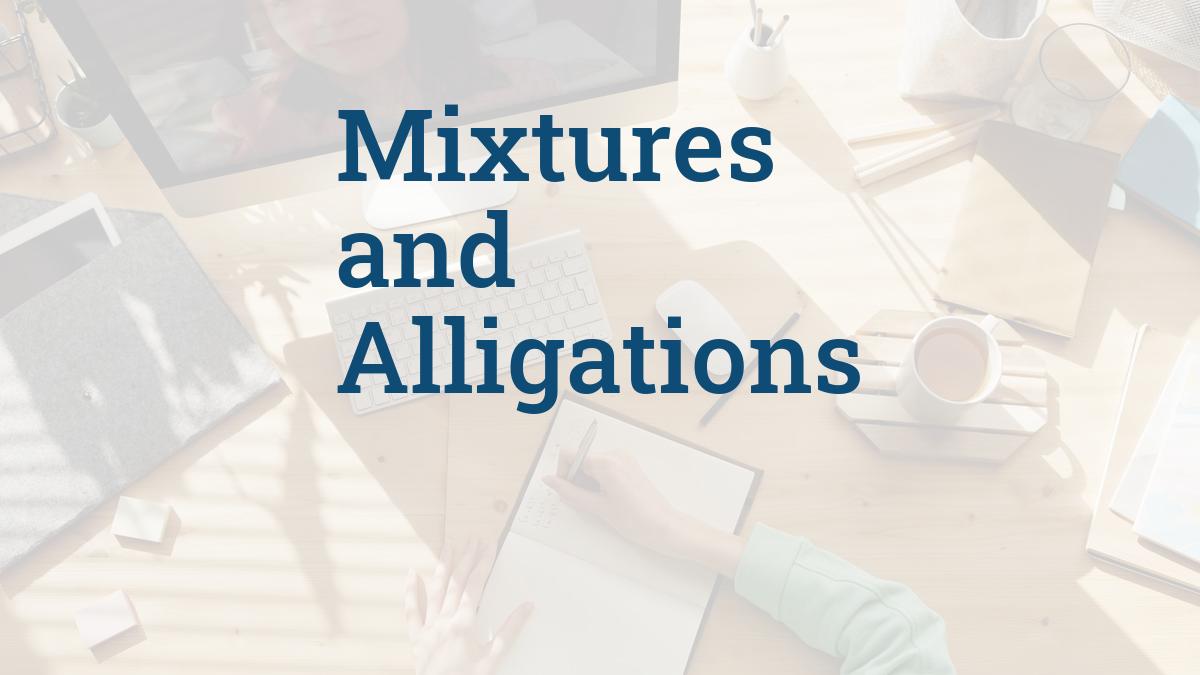 Mixtures are formed when two or more quantities of different values are mixed together. Alligation is a practical method of solving arithmetic problems related to mixtures of ingredients.

There are two kinds of problems:

Allegation: It is the rule that enables us to find the ratio in which two of more ingredients at the given price must be mixed to produce a mixture of a desired price.

Mean Price: The cost price of a unit quantity of the mixture is called the mean price.

Example 1: In what ratio two varieties of tea one costing Rs. 27 per kg and the other costing Rs. 32 per kg should be blended to produce a blended variety of tea worth Rs. 30 per kg. How much should be the quantity of second variety of tea, if the first variety is 60 kg?

Let the mean price of the mixture be Rs. x.

Example 3: A sum of Rs 39 was divided among 45 boys and girls. Each girl gets 50 paise, whereas a boy gets one rupee. Find the number of boys and girls.

Amount received by each boy = Re 1

Number of boys / Number of girls

Always identify the ingredients as cheaper and dearer to apply the alligation rule. In the alligation rule, the variables c, d & m may be expressed in terms of percentages (e.g. A 20% mixture of salt in water), fractions (e.g. two-fifth of the solution contains salt) or proportions (e.g. A solution of milk and water is such that milk : Water = 2 : 3). The important point is to remember is that c & d may represent pure ingredients or mixtures.

Example 4: A jar contains a mixture of two liquids A and B in the ratio 4 : 1. When 10 litres of the liquid B is poured into the jar, the ratio becomes 2: 3. How many litres of liquid A were contained in the jar?

Let the quantities of A & B in the original mixture be 4x and x litres. According to the question

Method 2: Alligation with composition of B

The average composition of B in the first mixture is 1/5.

The average composition of B in the second mixture = 1

The average composition of B in the resultant mixture = 3/5

Hence, applying the rule of Alligation

So, initial quantity of mixture in the jar = 10 litres.

Method 3: Alligation with percentage of B

The percentage of B in Final Mixture = 60%

By rule of allegation

Suppose a container contains x units of liquid from which y units are taken out and replaced by water. After n operations the quantity of pure liquid = x(1 - y/x)n units.

Example 5: Nine litres of solution are drawn from a cask containing water. It is replaced with a similar quantity of pure milk. This operation is done twice. The ratio of water to milk in the cask now is 16 : 9. How much does the cask hold?

Let there be x litres in the cask. After n operations